Anything That is Good Lasts 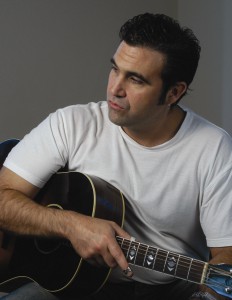 Stephen Cole: I once asked Chris Smither how he learned to play. He said, Mississippi John Hurt gave me lessons.  Really, I said, that’s incredible.  Then he smiled and allowed, well, Hurt wasn’t there, in person, but I had his albums and sat in my bedroom trying to replicate what was on the phonograph. How did you learn to play?

David Owen: I learned to sing the blues as a baby cryin’ for milk. [Laughs] Actually, I wore out Robert Johnson albums, playing them five hours every day.

S.C. These are the Columbia sides with Johnson on a rocking chair on the cover?

D.O. That’s right, he’s sitting in the corner. Wore them right out.

S.C. Why does Robert Johnson connect with so many contemporary blues musicians?

D.O. That haunting sound! His guitar, you hear his Hellhound on My Trail – Pow! – you feel that music with your body.

D.O. Sends a shiver right up your spine.

S.C. Before we go any further, where and when did you hear Robert Johnson?

D.O. Ottawa, early ‘80s. My father was really into Irish music – The Clancy Brothers, Irish Rovers. So I had a folk ear. Then I heard Johnson. Pow! I learned how to play a harmonica at the same time I was playing guitar. I just wasn’t playing in my room though. Man, I was everywhere. If I had to walk somewhere, I played my harmonica getting there. If it was long way away, I drove my 10-speed no hands and played.

S.C. A showman from the very beginning!

D.O. Right. I should mention that a big thing for me was seeing John Hammond Jr. in Ottawa. He was doing exactly what I wanted to do – translating ‘30s-style country blues and Chicago blues for a modern audience. I got right up in front at one of his Ottawa Blues Festival performances. I was practically on top of him. I was memorizing what he was doing. Going home, I didn’t talk to anyone in case I forgot something.

S.C. How long did it take before you could approximate what you were listening to?

D.O. Not long. I mean I wasn’t great, but I could play. I did my first gig when I was in high school. This was a St. Pius X in Ottawa. [Laughs] The priests freaked.

S.C. You were probably playing Hellhound on My Trail.

S.C. There is a jazz trumpeter, Jack Sheldon, who used to do a parody of rich white blues musicians. He sang a song called, Someone Stole Both My Cars Blues. His point being that rich white musicians can’t possibly access the source of the blues – plantations in Clarksdale, Mississippi, at the turn of the 20th century.

D.O. That’s horseshit. The blues is a woman, I forget who said that. It’s about sex, about life. Africans when they came to America weren’t playing the blues. That was something they learned here from a variety of influences. It didn’t start or end in Mississippi either. It went to Chicago. There are kids now, teenagers, who are getting into the blues because it’s good and anything that’s good lasts.

S.C. When did you decide to be a blues musician?

D.O. [Smiles] I was just out of high school and had one more drink than I could afford at a bar in Ottawa. I walked out broke, knowing I had to walk a couple of miles home. You could say I had the blues. [Laughs] I was wondering what to do with my life at the time: go to college like my parents wanted, or follow my dream – playing the music I love by Robert Johnson, Son House, and Willie McTell. I was throwing my thumb out occasionally, even though that time of night I never figured to get a ride. Anyways, I was mostly thinking about my future. God, I said, if you’re listening, buddy, show me a sign. A minute later, a car pulled up with the radio blaring Bob Dylan’s Like a Rolling Stone. And when the driver said, Get in, I did. A couple of months later I was on a Greyhound bus to Toronto looking to make it as a musician.

S.C. What kind of music scene did you find when you first arrived in Toronto?

D.O. There were clubs all over: Fat Albert’s, Hotel Isabella, Albert’s Hall, a lot of places on Queen St. that no longer exist. I played everywhere: clubs, on the street with my guitar case open. I was just looking to play.

D.O. Absolutely, I arrived in Toronto spring of 1983. Got a job washing dishes at Hernando’s Hideaway first day in town. Soon, they had me doing prep, cutting jalapenos. I couldn’t get over how nice everyone was my first day working with food, bringing me cokes and beer. What they didn’t tell me was that the jalapenos rubs off on your hands. Soon what with all they’d been making me drink, I had to go to the washroom. I take it out to have a pee. A minute later, Oh boy!

S.C. Any early shows that validated your decision to become a musician?

D.O. Yeah, a show in London, Ontario at the Fire Hall, where I felt good and the audience was receptive. End of the night I was duck walking along the bar like Chuck Berry, playing guitar and blowing harmonica, with the crowd screaming. Another time, an intimate club in Toronto, the Naval Club I think it was, everything just worked. People got up and started dancing.

S.C. Just like in a juke joint in Mississippi decades ago.

S.C. After a while you started to get noticed and you were opening in bigger rooms for some of the legends, Bobby “Blue” Bland, Dave Van Ronk, Paul James. What was that like?

D.O. Dave Van Ronk was great, such a warm man. I opened for him at the Isabella Hotel, and he was staying there as well. He invited me up to his room and tried to teach me an old song that he could barely remember; an old folk blues thing. I was writing the words down on a paper on the back of my guitar when John Hammond Jr. walked in and said, Hey, give me your guitar. And off we went, fooling around, playing.

S.C. Something people might not know about you if they’ve only seen you in clubs or heard your records, but you took a sabbatical for a while to become a successful businessman. Do you find it ironic or satisfying that you made it in business performing a variation on something you had to do every day as a musician?

D.O. Maybe. What happened is I always put up posters promoting my concerts. The owners at Albert’s Hall and the Black Swan saw my posters everywhere. They asked me to do stuff for other shows they were doing. Then the Diamond, a club in town, asked me to promote for them. It was a five-day a week job. I said sorry, I’m a musician, don’t have time. But this woman there wouldn’t take no for an answer. I started working for her, but I was still playing. Then CPI, Concert Productions International, asked me to work for them for a lot of money, and I thought, Hmn, I could make this business into something really big, but I can’t do both music and run a business. I respect music too much to go out there and do a half-ass job. So I devised a five year plan to develop a Toronto grassroots postering business and make some money. What I didn’t realize was that there was a national business out there to be had. So I took 10 years, but now I have a team in place that allows me to go back to music again.

S.C. Were you at all frightened about getting back on stage?

D.O. Just the opposite: I was dying to get back. The business is now set up and I’m doing something I love. I appreciate it more now. And the real surprise was when I started to do some shows as favours to friends, and I sounded better than ever. One of the reasons being I found a guitar I really loved. A Gibson Advanced Jumbo – best guitar in the world. It’s a 1991 remake of a guitar they put out in 1936 that was fantastic, but priced too high. Gibson always prided itself on being the guitar for the workingman. Oh, I love playing that guitar – loud, bright top, bouncy bottom end. Steve Earle plays a Gibson Advanced Jumbo.

S.C. Pretty soon after your comeback, in 2003, you put out an album, which was like a survey course of the blues.

D.O. Yeah, Red Hot Kisses was a tribute to musicians I love, Robert Johnson, Muddy Waters, Big Bill Broonzy. I wanted to start over right with the guys who got to me at the very beginning.

S.C. Your new album, Four on the Floor, however, is more personal, you wrote all the songs. Also, the music is more laid back. And your singing seems more relaxed. How do you account for the change?

S.C. How did the songs come to you? One of my favourites, the restless Highway Driver, sounds like it was composed while you were on the 401, in stalled traffic.

D.O. [Laughs] Actually, I wrote it in the bathtub, but you’re right. I was racing back and forth between Ottawa and Toronto, looking after my father’s business, when I was writing the song, and I had a woman in Toronto I wanted to see. I spent a lot of time in the left hand lane behind drivers who had apparently fallen asleep.

S.C. My other favourite song on the album, The Truth has a real country flavour. It almost sounds like something Johnny Cash might have recorded. Does this indicate a possible change in direction in your music?

D.O. Well I love country music. The first song that ever had an impact on me was Streets of Laredo by Marty Robbins. And I love Johnny Cash. During shows, I tell people I wanted to write a Johnny Cash song so I stayed up two weeks doing amphetamines and tequila and wrote The Truth.

S.C. I hope you advise audiences not to try that at home to ward off any lawsuits.

S.C. Right now you’re heading out on the road, doing a Quebec tour that will take you through Montreal and Quebec City. You’ll be headlining, playing before people who’ve presumably never seen you before. How do you feel about that?

D.O. Really excited. I always felt like music was my calling. I had a five and 10 year business plans, now I have a plan for my music. I want to take my music to new places. I want to see how far how I can go writing my own material. More than anything, I want people to understand how I feel about music. Part of me is still that kid who wandered out of a club in Ottawa in the middle of the night and heart Like a Rolling Stone while hitchhiking home and decided, yeah, music!

Stephen Cole is a Toronto arts journalist/author. He is also David Owen’s cousin. David was once prevented from going to a Muddy Waters concert because he had to go to Stephen’s brother’s Rob’s stag. To date, he has not held it against the Cole family.