Robert Johnson allegedly became a bluesman by making a midnight pact with the devil at the crossroads near Dockery’s plantation in Mississippi. His disciple David Owen found his calling by making a deal at roughly the same hour, a half-century later, with Bob Dylan at the corner of Preston and Bronson in Ottawa.

“I’d been at a club,” Owen smiles, recalling the incident. “I was just out of high school and had one more drink than I could afford. I walked out of the bar broke, knowing I was
going to have to walk a couple of miles home.

“You could say I had the blues,” Owen laughs. “I was wondering what to do: go to college like my parents wanted at the time, or follow my dream – playing the music I love by Robert Johnson, Son House, and Willie McTell. I was throwing my thumb out occasionally, although that time of night I never figured to get a ride. Anyways, I was mostly thinking about my future. God,” I said, “if you’re listening, buddy, show me a sign.”

A minute later, a car pulled up with its radio blaring Bob Dylan’s “Like a Rolling Stone.” Owen heard Dylan’s raspy command, “If you ain’t got nothing, you got nothing to lose!”

When the driver said, “Get in,” Owen did just that. Months later, he was in Toronto, working as dishwasher and performing his music in clubs and on street corners.
Eventually, he made it to bigger venues, opening for Paul James and the Downchild Blues Band in the Diamond Club. Summers, he played Mariposa and blues and folk
festivals throughout Ontario and beyond, still broke but having the time of his life.

Eventually, he became a persuasive guitarist while playing a mean-as-a-toothache harmonica, Little Walter-style. He also found his own singing voice, a relaxed country-blues drawl. To the delight of his parents, and surprise of some friends, he also became a successful businessman, turning the challenge of putting up posters for his next gig into the biggest wildposting communication company in Canada. 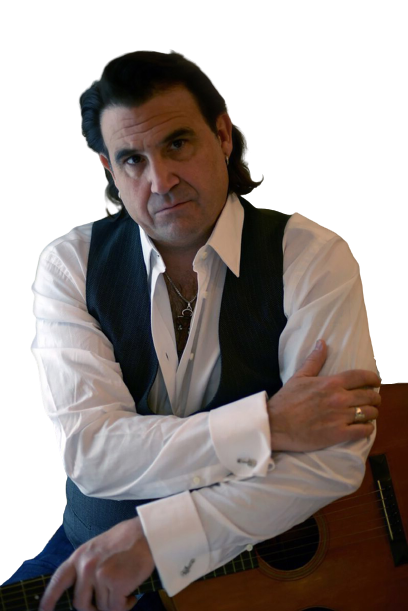 All those experiences and more – a thousand broken guitar strings, a few broken hearts, and hundreds of great memories, like the night he, Dave Van Ronk and John Hammond Jr. rescued an almost forgotten folk song from extinction – go into a typical Owen performance and his two albums, Red Hot Kisses and the recent Four on the Floor. (Encouraged by the response to his own material in clubs, Owen recorded all his own songs on the latter disc.)

As Dr. Z from CFXU-FM once observed, “This guy is the real deal.” Comments Brian Blain, Managing Editor of MapleBues: “David Owen delivers his country blues with an intensity and passion that shows his love and knowledge of the genre.”

This is a well-done, good sounding and tasteful album. I`m really enjoying it. Thanks for sharing the good music. Bruce Iglauer-Alligator Records

“I learned to sing the blues as a baby crying for milk.”